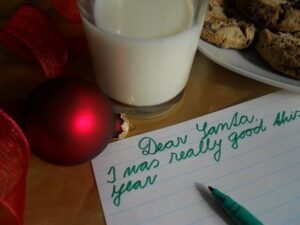 There is nothing quite as endearing as a young child’s belief in magic and the impossible. Believe it or not – the capacity for magical thinking actually stems from the same source as their impulsivity and egocentrism. Their immature brains are capable of handling only one thought or emotion at a time, that is why they lash out when frustrated and think fairness means they get the biggest cookie. Between the ages of 5 to 7 their brains will grow and they will be able to experience two thoughts or feelings at the same time as well as conflict between them. Impulsive acts will be replaced with more tempered ones, e.g., part of me wants to throw the toy but the other side of me thinks that might hurt you. Their wholehearted belief in magic stems from this place as there is no back of the mind to challenge their thinking as to whether Santa Claus is real or if tooth fairies really do exchange money for teeth. When children start to be able to mix their thoughts and emotions it starts to bring to a close this magical period – Peter Pan does have to grow up but you can’t blame him for wanting to hold onto his childhood.

I still remember the day I discovered Santa wasn’t for real. I was around six and we were visiting my grandparents and my Grandpa put on his red Santa suit and walked in with a sack full of presents. This one particular year I looked at him and thought to myself, “Santa looks familiar, who does he look like? … He looks like my Grandpa!” At this point I yelled out, “Grandpa – is that you? Are you Santa?” The adults quickly responded with hushes and glares that served notice that I should be quiet with my observations. While they later protested that this was NOT Grandpa, I would not be shaken. One part of me saw my Grandpa in a red suit while the other toyed with whether he might indeed be the real thing. I ended up concluding that adults were big fibbers when it came to all things Santa Claus.

The next year I felt compelled to demonstrate unequivocally that Grandpa and Santa were actually the same person. Given the previous year’s experience my parents had wisely changed strategies and said Santa wouldn’t be coming in person but would leave a stocking with presents at the end of my bed. I decided at that point to create a trap that would at last prove me right. After wishing my family goodnight I went to my room and set up an elaborate booby trap of strings and cans that would be triggered when someone entered my room. I will never forget awakening to the sound of my Grandfather’s frightened howl and then laughter, finding himself tangled up in my booby trap holding my Christmas stocking. At last I had my victory, caught red handed – Santa Claus and Grandpa were indeed one and the same. Although one side of me was sad that I lost Santa that night and all things magical, I am grateful for the growth in my prefrontal cortex and all the tempering it brought. I think I still might write Santa a letter this year but perhaps I will ask my husband to post it  ; )

Wishing all of you a very merry and magical holiday season.