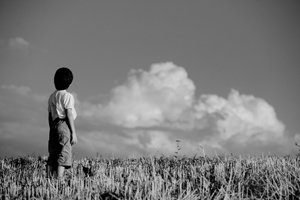 I drove down the little lane towards the house in the country and I could see a little boy waiting for me. The farm was vast. The house was large and dark. The boy was little, somehow not really matching his surroundings.

Peter had been suspended from the school on the last day of classes before the Christmas holidays. His alarm and frustration had escalated to the point that it was impossible to get him to do anything. Any request coming from an adult was welcomed with the exact opposite behaviors; any request for a conversation was followed with nasty words, accusations and threats. Peter had been identified as a bully in our school. He walked around looking for more vulnerable students, targeting them with physical and verbal abuse. He was defiant towards teachers and adults, including his mom, and demanded that his requests and wants be met. He threatened when things were not going his way.

I asked the principal if I could see him by myself. Meetings kept on taking place where Peter would shut down and the adults would leave filled with frustration. The parents had tried to take him to another school, but no school that knew of his reputation was prepared to take him. After some discussion with the principal, she agreed to call the parents to see if they would allow him to see me. They agreed, but said that they would not bring him to the school; if I wanted to talk to him, I would have to pick him up and bring him home afterwards.

As I drove down the meandering country road, I spotted Peter waiting for me. Watching me carefully, he climbed into my car with a hesitant hello. We drove and chatted while we munched on grapes that I had bought on my way to his house. We talked about the holidays, about the chickens on his property and who got to feed them, about his new dog ‘Wolf’ (and how much bigger he was than my little Pomeranian), and about his dirt bike. I was doing everything I could to collect him, doing everything I could to help him to attach to me.

Once we got to my office we sat down to do some drawings. I asked him to make a picture of what he thought was happening. I was looking for integrative functioning – could he see both sides of the issue, could he talk from the ‘other side’ of the problem. I wanted to see if he could feel his sadness about what wasn’t working. I drew a little heart on the paper and asked him what his story felt like. He took a black pencil and colored the whole heart in black. He looked at me and said ‘It feels like I am being swallowed into a big black hole into nothingness.’ Then he whispered quietly, ‘I feel like I don’t exist.’

Peter’s counterwill – which is the human instinct to resist pressure and coercion, and serves attachment by keeping children from being unduly influenced by those they are not attached to – started to make sense to me. His brain was protecting him against a sense of vulnerability that was too overwhelming. He was defended from attaching to any of the adults in his life. Defending against vulnerability, according to Dr. Neufeld’s paradigm, is a protective mechanism involving emotional and perceptual filters that screen out information that the person would find too wounding or painful. There was something in this little boy’s life that was making it too hard to feel.

I realized that what I needed to do was to somehow soften the hearts of the adults towards this little boy. It was crucial to stop seeing him as the bad boy who would not do our bidding and instead to see the little boy that needed us to invite him to exist in our caring presence. We needed to see how incredibly vulnerable and defended he was. We needed to yearn for him, and seek to be in a right relationship with him where he could depend on us.

Last night, my teaching partner was shopping for groceries after work. As she was selecting apples she heard a little voice calling her name. When she looked up, she recognized Peter who by now was running towards her with the greatest smile on his face. ‘I am coming back to the school tomorrow!’ he announced to her, ‘I can’t wait to be back with all of you again!’

My yearning is that we’ll be able to keep our hearts soft towards this little boy as we seek to create a school community that is safe and welcoming to all kids.