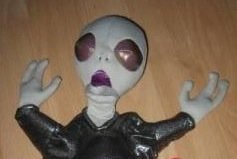 My daughter was five years old and eager to play dolls with the “big girls” next door. She looked up to these older girls and longed to join in whenever she saw them playing outside. Seeing an opportunity, she hurried out the front door with excitement in her eyes and her favourite doll tucked under her arm, leaving me watching from the window.

In that moment it suddenly dawned on me what was about to play out… and what I wanted more than ever was to pull her back and protect her from what might happen. And that was because I saw something she did not… I knew that the doll she was holding so lovingly was not your typical doll. This “doll” was an alien puppet that belonged to her father — a gag gift actually, but this concept would have been lost on a five-year-old. To any other eyes it would be seen as ugly, but to her it was precious. She had fallen in love with this alien and carried it around like a doll. If nothing else, it was a connection with her father, whom she adored.

So what was I worried about? Her taste in dolls was not really a concern in my eyes, especially because I could see the affection behind it. My concern was that the other children might not see the same endearing qualities of this ugly doll… and they might not be able to contain their disgust.

As it turns out, my concern was both warranted and realized. “What an ugly doll!” echoed through the air. The words were wounding and I could see the hurt look in my daughter’s face as she experienced rejection from her peers.

My heart yearned to protect her. I wanted to take the hurt away and keep her from experiencing anything else that might wound. Yet this was a pivotal moment for me as I realized this was only the beginning. There would be some things in her life that she would have to face, and I suddenly saw the importance of her developing the strength and confidence to face them. Although very tempting, maybe keeping her in a bubble was not the best idea. I had the sense that protecting her meant something more, something deeper. And so I chose not to brush off the experience or try to distract and make her feel better; rather I chose to hold her in that painful moment. I wrapped my arms around her while she felt the sadness and disappointment of the rejection until she could move through it to the other side.

As I hugged my daughter and the tears came, I felt her pain. And I realized that as a parent there would be times I would need to step in and shield her from things that were too much to bear, otherwise I risked her defenses taking over and toughening her heart. At the same time, there were going to be some times where she needed to know what she could handle things, that she could survive the girls’ wounding words. And I needed to be there for her through these experiences, to be a safe place and to keep her heart soft. This was the key to her becoming resilient and able to face the challenges that inevitably lay ahead. Because there just might be more ugly dolls in her future…