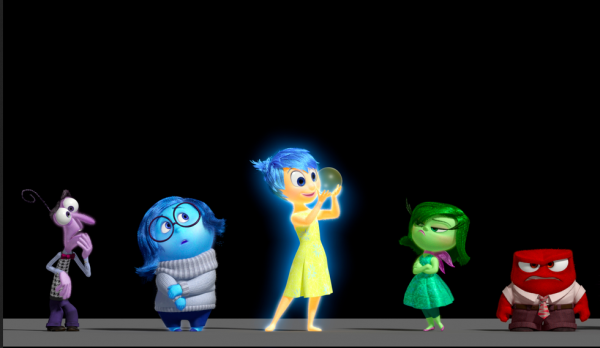 Disney/Pixar’s animated movie, Inside Out, released on DVD and Blu-Ray throughout North America this week.

I took my daughters to see the movie while it was still playing in theaters, and am happy to share some of my insights — and delights — about this wonderful film. (And I’ll warn you right here that this review contains spoilers.)

Inside Out is set in the colorful and creative control room of a child’s brain. Right away the main character and leading emotion, Joy, orients the viewer to the child hero: Riley, a gurgling, cooing, adored newborn.

Joy is joyfully running Riley’s emotional show, storing all of Riley’s marble-like memories along “Headquarters” walls and happily sending significant ones up a chute and into long-term storage. But the control room soon gets crowded, according to Joy.

In a fabulous scene where Riley’s parents introduce their toddler to broccoli, Joy simultaneously introduces her “colleagues” (other emotions) in action—at the same time demonstrating what Dr. Gordon Neufeld refers to in his latest course, Heart Matters: The Science of Emotion, as the first law of emotion: Emotion seeks expression.

There’s Fear, who stares in wonder at the incoming broccoli on a screen that shows Riley’s perplexed perspective and asks, “Do you think it’s safe?” Next comes Disgust, who hovers over the levers with her upper lip curled, since it’s her job to keep “Riley from being poisoned, physically and socially.” Disgust makes her assessment and then her dashboard move… as Riley’s emotion is expressed in the launching of her broccoli bowl at Dad. At the threat of a no-dessert consequence, Anger moves toward expression, pounding on the dashboard with hair aflame, sparking Riley’s tantrum.

Riley’s dad responds with the airplane fork game, instantly entrancing all the emotions, and thus Riley. This one-minute scene succeeds in painting a hilarious portrait of the preschooler personality. True to development’s agenda, Riley can only register one emotion at a time. Her emotions have a certainty in their thinking. They’re short-sighted. They’re given to pendulum swings. And, best of all, they have an innocent belief in magic.

Saving her least-favourite emotion until last, Joy introduces us to Sadness. Throughout the bulk of the film, Joy works hard to keep Sadness out of the dashboard driver’s seat and far away from Riley’s memories—lest she taint them with her sad, blue touch.

Pixar opted to draw on Jaak Panskepp’s basic emotions—which simplifies the storytelling, of course, for young viewers. But it left me yearning for a broader, more accurate picture of emotions. Joy’s inherent promise to the viewer, by way of her description of a “crowded” control room, left me unsatisfied when only four more emotions came on scene. I would have loved to see the control room jammed with a wide spectrum of other emotions—dozens of them, even if only briefly—such as calmness, insecurity, resistance, timidity, boredom, to name a few. Additionally, “Frustration” would have been a more accurate name for what Pixar coined “Anger”—and would have served as a blame-free word choice, to boot. Likewise, “Alarm” would have been a more descriptive name for “Fear.” “Disgust” provided a lot of comic relief, but in reality is a survival emotion and wasn’t presented that way in the film.

Nevertheless, even sticking with five emotions and portraying them the way they did, Pixar gets high marks for showing the emotions’ work. As Dr. Neufeld says, “Emotion has work to do. It is meant to move us in ways that serve us. This is the way Nature cares for the child.” There is no doubt in the film that each of the five emotions care deeply for Riley and that despite their limitations, they are moving in her brain out of a shared motivation to serve her.

Things get interesting when Riley is 11 and her family moves from Minnesota to San Francisco. There, Riley is faced with all kinds of obstacles: broccoli “ruined!” pizza, whispering classmates, and distracted, busy parents. What’s more, Riley’s a new adolescent, and so is experiencing high levels of alarm—related to the move, and also from the loss of proximity to her parents (and imaginary friend Bing Bong) that comes with the territory of growing up. In other words, separation is incredibly intense for Riley at this time in her life.

Sadness doesn’t mean to interfere, but she can’t stop herself from approaching Riley’s memories, coloring them sad. Joy makes no room for Sadness. She tries to reason with Sadness. She focuses on Sadness’s behavior. She judges the feelings. As developmentalists could only predict, a messy situation gets messier when Joy tries to rescue Riley’s emotions from further “damage.” During an altercation, Joy and Sadness get sucked into the memory chute, forced to find their way back to Headquarters. Then the real quest begins.

“Emotion is spontaneous, but is not inevitable,” says Dr. Neufeld. “It can be dammed up. Impediments can get in the way.” Pixar throws many impediments in Joy’s way to illustrate this.

In Long-Term Memory, Joy is dismayed to see workers tossing out Riley’s memories, seemingly on a whim. But as classical psychologist Jean Piaget described, “The first futility children experience in their life is holding onto good experiences.” Joy gets this same first taste of futility, and adults get a good laugh, as phone numbers are tossed from long-term because, of course, Riley’s “got her cell phone for that.”

Meanwhile, Fear, Disgust, and Anger struggle alone at Headquarters. They’re desperate for Joy to return to the controls and run the show, as usual. They do their best to express themselves as Joy would, all emotions believing Joy is the answer. But they’re failing. The emotions clam up—what neuroscientists would describe as a pressing down on all of the emotions—resulting in a depressed Riley. Without the intended movement of emotion, Riley is no longer moved to care. She stops caring about her attachments. Her five “personality islands” that represent the things she cares about most—Goofball Island, Hockey Island, Friendship Island, Honest Island, and Family Island—begin to crumble.

Joy’s and Sadness’s journey physically takes them through Long-Term Memory Storage, Abstract Thought, and to Nature’s answer in play: Imagination Land, where Bing Bong is always ready for fun… and Riley’s imaginary boyfriend waits for his shining moment to gallantly step in. Joy and Sadness traverse through a Hollywood-like studio called Dream Productions, the Subconscious, and a wasteland of discarded memories.

But ultimately emotions Joy and Sadness must complete their emotional journeys. Through her play and through her unstuck tears, Joy comes to the realization that she can’t censor Sadness’s influence. In fact, she needs Sadness, and needs to believe in Sadness’ value. Ultimately Riley’s story is one of adaptation – she cannot adapt to her move until she is free to let go of the world she has left behind. And that’s a job for Sadness alone. Once believed in and valued, Sadness blooms in the newfound confidence that grows after she realizes how much she matters, too.

Once Joy and Sadness fulfill their heroes’ journeys, it’s all the more satisfying an ending when the rest of the emotions must mix together with Joy and Sadness in order to complete their shared mission for Riley: to save her from the adolescent temptation to flee from her alarm in this very significant rite of passage into maturity.

Just as William Blake penned, “Joy and woe are woven fine,” Joy and Sadness prove out what Dr. Neufeld says: “happiness lies on the other side of sadness that has been embraced.” When Joy and Sadness mix, sharing the control panel, Riley adapts through her tears, finding comfort in the arms of her loving, caring parents. And as she adapts to this huge change in her world and first passage into adolescence, Riley emerges as a separate person, her crumbled personality islands re-built as dozens of new islands form.

My children enjoyed the film, even though at five and six they were too young to fully grasp the film’s intricacies, meanings, and much of the humor. After we saw the film, I asked my daughters what the movie was about. They shook their heads, confused.

After a pause, though, my eldest said, “Everything was all mixed up.”

She didn’t realize what she was saying. But she was right. Even for children too young to grasp most of the film, Inside Out’s message will resonate in some way: happiness can’t own a person—or constantly drive the controls. All emotions are important and have the child’s best interests in mind. They all serve a purpose. What better message of a full picture of emotional health than that?