I still remember my parents’ conversation. I was playing on the living room floor. My ears pricked up when I heard my father saying to my mother, “Well, we want her to have a good Grade One teacher to give her a good start, and Miss Cox is the better of the two teachers.”

Yay! School! Yay! Reading! I don’t remember much about Miss Cox, nor do I recall her paying any attention to me, but I had things I wanted to learn. Especially I wanted to read! My father explained to me much later that I had expressed a very early interest in reading, but my parents didn’t teach me the alphabet lest I be bored in school.

I discovered that school had strange rules, including having to sit still at a desk for a long time (this was definitely boring) and being punctual. I was shocked that kids were mean to each other and that recess was a terrible anarchy. Nonetheless, I was immensely pleased with myself when I could make sense of the marks on the page and could take my Dick and Jane books home to read out loud to the family!

Grade One was a gentle introduction; the hurly-burly got much worse as I moved through the grades. I still remember the misery of a year with Mrs. Handby, an old-style British Empire tyrant. She terrorized us all with shouting and shaming, sharp raps from her pointer, and lurid images of hell-fire. She had deadly aim with her chalk ‘bullets’ and eyes in the back of her head.

I was scared of Mrs. Handby and kept out of her line of fire as much as possible, but I did manage to learn what was on offer in spite of her dreadful style. My teachers didn’t have a lasting impact on me because I went to school for my dad. He seemed to think learning things was important, and was always interested in what I was being taught and how I responded. He supported my own interest and curiosity because he delighted in my learning. (This is profoundly different from rewarding me for good grades, which he never did). I was shielded by this all-powerful attachment from my worst experiences; my relationship with my dad protected me from the trauma a teacher like Mrs. Handby might have inflicted. I felt he was for me always and that he knew everything!

I can remember another teacher in a later grade telling us in a math lesson about calculating the circumference of a circle – you had to multiply the diameter by pi. I asked, “What IS this pie?” The response was, “Don’t ask, just do it,” to which I replied, “I’m going to ask my Father!” That evening after supper, he supplied me with the explanation I needed: “It’s a Greek letter that symbolizes the ratio of the circumference to the diameter.”

My birthday was in November, and my parents considered me a ‘worry wart,’ so they delayed my introduction to school, my first experience outside the protective shelter of my family, until I was almost seven. By this time I had gone through what the pioneer Swiss cognitive researcher Jean Piaget calls “the 5-7 shift.” This shift marks a big enhancement in brain function, as children become able to consider two things in relationship to one another, rather than one at a time. Along with this shift comes the ability to see differences, to take things into context, and to feel two competing impulses simultaneously. My newfound ability to understand symbols (e.g. this mark on the paper stands for a sound, or a number) gave me an advantage over less mature classmates. Contextual thinking also makes it possible to anticipate consequences and thus avoid getting into trouble. Seeing and understanding difference, in addition to enabling me to hold on to my inner image of my father, made me less affected by peer pressures.

In my father, I had a teacher who didn’t change every grade, who was there every night in his big chair, often expounding his latest theories. I cared about what he thought of me much more than I did about what others thought.

My relationship with my father carried me through until I started university, when a real chasm opened between us. After all those years of his invitation to me to show my own interests, I was ready to declare that my choice of vocation was mine, and not an extension of his wishes for me. Earlier in my life there was no difference in our intentions but I now found there was no room in that relationship for me to discover my calling. I was very unsure of what I wanted to do. It wasn’t that I had a clear career path in mind and we were at odds, it was the uncertainty I felt that caused me to resist any direction from him. 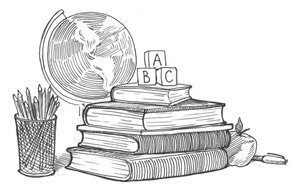 The years of adolescence and early adulthood are a natural time for young people to seek their own paths, and other adult attachments are so useful when those at home are not giving enough room for emerging interests to unfold. As I grew beyond my father’s plans for my future, I began to feel that now there was no one who cared whether I went to a good school, had a good education, or had enough money to survive!

Missing this adult support and understanding, I felt insecure and easily wounded by criticism. I felt it keenly when my fellow students didn’t like me, and my academic performance was poor.

In my third year of study, I decided to take a course in lithography (I can’t even remember why). The teacher was an eccentric-looking fellow with a wild scraggly beard, fringed and beaded jacket, prominent eyes and a large forehead, and a strange evasive teaching style, as though he wasn’t comfortable with the role of university professor. Once the class was assembled on the first day, he stared at the ceiling and declared, as though to the light fixtures, that lithography was a difficult subject.

I have been thinking for some time about how to describe him. What quality did he have that caused a door to open in me that had been closed until this encounter? Recently he was the subject of a radio program about his artistic career and influence, and I was keen to hear if anyone could identify what made him so very special. The radio documentary portrayed the contrariness and humour of his art, and his technical mastery of a difficult medium, but what was it about him that made him a magnet for young artists and a catalyst for their development? For one thing, he was quite shy in his approach and not in anyone’s face, and he expressed interest and curiosity in a sly, very playful way. I was intrigued by the way he would ask provocative questions to pique our attention. It felt genuine! He really did want to know us! It was as though he was looking to see if ‘anybody was home,’ alert to each student’s potential for self-expression. I could identify with his very personal way of making art – what a new idea– that what was inside you could become the substance of your work!

I had tentative opinions and ideas but had formed a protective habit of keeping them to myself. I wanted to avoid the inevitable “you are weird” response of my peers. I didn’t even realize how much of a secret self I had developed until this professor called me forth! Certainly I knew I had found my better as a ‘weirdo’ – I had never met anyone so fascinating! Many profs were ‘dangerous.’ They could be capriciously and often personally cruel. He seemed completely without that malicious edge.

This was a wonderful time for me. My teacher worked on his own odd and idiosyncratic work in the school studio and welcomed his students to hang out and talk to him. The fussy chemistry of lithography, the strenuousness of the printing process, and the need for access to the press, gave us reasons to spend time with him, working side by side for long hours. The thrill of pulling that first print off the press in his class was equal to my “Dick and Jane” reading excitement in Grade One.

As my father had once done, he provided me with a sheltering attachment. As a result of having one safe place, I found my feet and the rest of my time in school was rich and productive. I always had a person to go to when I was struggling, and I was back to being protected by a relationship that proved remarkably unconditional. He held on to his students long after we graduated and he remains a significant figure in my life.

The benefit of relationships with teachers, mentors, and wise people lasts a lifetime! Whether talking about parents (like my father) or others who provide us with room to be ourselves (like my art prof), Gordon Neufeld identifies an “invitation to exist” as vital to our development.