She’s crying again. More like a high-pitched scream. I am so exhausted! Why isn’t she?? She seems to be beyond herself now – in a frenzied state. And all I can think about is the paper I still need to write before morning. My plan was 8 pm – lights out! Then it was going to be my turn. Now it’s 10 pm and both of our alarm and frustration is going through the roof!!

I am not sure what bedtime looks like in your house, but this was a regular scenario for us. At least it used to be, until I discovered the magic in my voice.

It started one night very much like the one mentioned above – I held my daughter in the rocking chair as she hyperventilated between sobs, and contemplated my options. In desperation, I decided to call a friend. Not long into our conversation, I noticed that something miraculous had happened… my daughter was fast asleep! Mission accomplished! But how? What was the secret ingredient? Pixie dust? Perhaps a natural gas leak? Or could it possibly have been the sound of my voice in quiet conversation? (Note that this was a much calmer tone than in the hours before when it was loaded with frustration: “That’s it!! I’m closing the door. No more water. No more stories. GO TO SLEEP NOW!!!”)

That must be it! The magic was in my voice! It made sense really. I am not sure why I never noticed it before. The songs I would sing to calm her down. The way I gently whispered “breathe” when alarm took over and stole her breath away. Now I had something I could work with – a way to help her feel close when she faced the unbearable separation of night time. 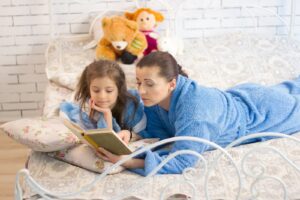 And so began what was to be for years to come a treasured ritual – a time of reading to my girls before bed. We started with the Narnia Chronicles and began a tradition of reading classics that spanned a decade and continues to this day. And while the book was usually enough to bring her to rest, sometimes I needed to sing too. (In fact, this proved to be an even stronger elixir that did not seem to require being in tune or on key!)

I had found my magic and it opened my eyes to what she needed from me – a way to keep close and a way to hold on when the world threatened to go dark around her, leaving her alone and separated from the ones that she loved.

I wonder how many other parents have untapped magic within them. It could be the voice, it could be the smile, it could be one’s smell – some invisible string for them to hold on to so they can hold on while drifting to sleep. In essence, the magic is something that reminds them that they are not alone, something that bridges the night and puts their eyes on the next connection.

I realize now that it wasn’t actually about the magic at all. In fact, the answer was within me the entire time – I just didn’t see it in the fog of my own exhaustion. The magical way through was about seeing what my child needed and stepping in to be the answer.