Our guest contributor for this editorial is Sara Easterly from Seattle, Washington. She has taken a number of courses through the Neufeld Institute and we are pleased to have received this submission from her. A brief bio for Sara is included at the end of the editorial. 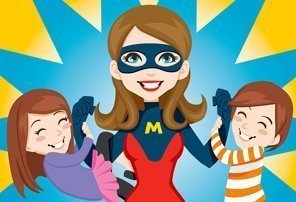 In the last month there’s been an intense amount of media scrutiny on parenting. Early in May, Elisabeth Badinter released her latest book, The Conflict: How Modern Motherhood Undermines the Status of Women. Shortly thereafter, Time magazine ran a cover story “Are You Mom Enough?” – the attention-grabbing headline flanking an equally attention-grabbing image of a mother breastfeeding her three-year-old son.

In both cases, the media energy turned frenetic, with other major news outlets clamoring to chime in with their fresh take on the story, newspapers churning out editorials, mom bloggers in uproar, and comedians having a heyday.

As a new mom to two daughters, I can’t help ponder why parenting, particularly motherhood, is pressing such hot societal buttons right now.

I’ve come to think that part of the problem is our human nature – the tendency to divide into good and bad, right and wrong. It also seems partly due to the viral nature of the news media in this digital age.

The other significant piece, I believe, is that when it comes to parenting, we’ve lost our confidence.

There’s a lot of judgment heaped on parents overall. Everyone seems compelled to dole out uninvited opinions whenever children are involved – from friends to family members to total strangers.

Every time I fly with my children, I find myself in a state of alarm. On a recent five-hour flight, my two-year-old spent four-and-a-half hours joyfully looking at books, playing with toys, and happily chatting… followed by nine (highly uncomfortable) minutes of loud crying, kicking, and screaming when forced to be buckled into her seat at the start of our descent.

After the plane had parked at the gate and we all stood in that awkward stillness and quiet while everyone waited for the de-boarding process to begin, one woman several rows ahead of us pointed at me and loudly announced, “You’ve got a real screamer there.” Nobody breathed a word while the woman waited for my response. Her index finger remained pointed, ready for battle. The awkward silence as all the other passengers stared at me, too, made me feel as if they concurred.

If it hadn’t been for one woman who later whispered, “I thought she did great!” I’m not sure how long it would have taken me to pull my mind out of the shameful place it was headed, asking, several months before Time ran its cover story, whether I was mom enough. Either way, in that moment I felt an almost desperate need for outside validation.

I could go on with dozens of similar examples in my short career as a parent. The point is that our parenting confidence is already tender thanks to pervasive societal judgment. So media frenzies added into the mix only chip away at that already fragile place, leaving us searching outside ourselves for the answers, never fully trusting ourselves in knowing what’s in our child’s best interests. We’ve bought into the fact that our approach to parenting must fit in, or that our children should act in socially appropriate ways right out of the Baby Björn carrier. Our lack of confidence is creating a market for this kind of media hype.

Since I sought out the Neufeld Institute material two years ago, my parenting confidence has been building. Mind you, I was initially drawn to the material looking for specific answers to very specific struggles. What I found, though, was so much richer than that. I learned the vocabulary to bring various developmental dynamics to consciousness, and I’ve been provided with a map for how to help children reach their full developmental potential.

It sounds lofty, yes, but thanks to my understanding, now, of the conditions children need to truly grow up and mature, for the most part I’m able to turn off those nasty, nagging worries about what I’m doing wrong that’s turning my two-year-old into a “real screamer,” and instead focus on the big picture: how I can provide a safe, deep attachment to help grow my children into resilient, soft-hearted, independent people.

For me, it really comes down to parenting with confidence – believing that I’m big enough, mom enough, and my children’s answer. This confidence comes from within. It’s intuition-based – not expert-based, not technique-based, not learning-based, and definitely not media-based.

During his keynote address at last month’s Neufeld Institute Parent Conference, Dr. Gordon Neufeld said, “What children need is for us to resume our rightful role in our their lives, to believe that we are their best bet. If we believe it, then we’ll become that. But it must start from a place of presentation, from believing in ourselves as the child’s best bet.”

I love this reminder, which came at exactly the right time – just days before the most recent blast on parenting in the media. And it’s so very true. Parents aren’t in need of the right answer. Parents are the answer.

Sara Easterly
Sara Easterly is a children’s writer and a mom dedicated to helping her children reach their full developmental potential. She first stumbled upon the Neufeld material through a presentation given by a Neufeld faculty member while looking for a quick fix to some sibling-related aggression. She didn’t get a quick fix at all. Instead, her eyes were opened to a wealth of information that felt natural and intuitive and right — and so much more than the minutia of what is best described as cow-tipping, only with a newly sitting baby. Now, her eyes are set on helping her two daughters reach their full developmental potential by providing them with a safe and secure attachment and the conditions they need to mature.

A children’s book aficionado, Sara seeks out almost any opportunity to surround herself in literature. As an author publicist running her own business, she’s handled publicity for authors such as Newbery Honor Medalist Kirby Larson and New York Times bestselling author R.A. Salvatore. As former regional advisor for the Society of Children’s Book Writers and Illustrators (SCBWI) of Western Washington, she led one of the largest chapters of the international organization and was recognized as 2009 SCBWI Member of the Year. As a writer, she’s published multiple articles and her first published book for children, Lights, Camera, Fashion garnered an Oppenheim Toy Portfolio Gold Seal Award and 2007 Parents’ Choice Silver Honor. And as someone deeply passionate about the intersection of children’s literature and the Neufeld Institute material, Sara reviews kids’ books that help deepen the bonds between parents and their children on her blog, Book Bonding, which can be found at http://bookbonding.posterous.com.