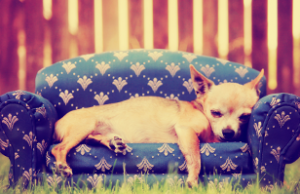 This is a story about our little Mexican dog, Poquito, and his journey with food.

It wasn’t too long after we had moved to Vancouver Island that my husband, Andrew, went on a special trip to Mazatlan with a group of youth. About halfway in, I received a phone call. Through a fuzzy connection, Andrew asked how I would feel if he brought home a Chihuahua. Confused, but not opposed, I gave my okay. He said it wasn’t for sure, don’t tell the girls, I have to go.

It came to the end of the week and I went to the ferry with the girls, still in suspense, to pick up their father. He was wearing his oversize parka as he walked off (climate adjustment from Mexico, we figured) and we all walked together to the van. It was at the van that Andrew pulled out a little colorful hamster cage from under his parka, and a tiny bedraggled Chihuahua-ish puppy poked his head out to greet the girls. Squeals of delight erupted, undoubtedly frightening the already trembling creature.

We decided to call him Poquito, “a little bit” in Spanish. We had one dog already – a big bear of a dog we called Briggs. So “a little bit” seemed to fit!

My husband had brought him from the streets of Mexico, and we figured he was about three months old. Andrew had stopped eating part way through this trip so that he had enough cash to bring him on the flight home. And so I had two starving creatures before me. It wasn’t long before Andrew had his fill and was back to eating normally. However, I can’t say the same for Poquito.

Poquito was frantic about food. No sooner would we give him his kibble than he would desperately devour it – so fast sometimes that we thought he would choke. We figured out that if we put a rock in his food bowl, it slowed him down a bit as he had to work around the rock to get at the food. We also decided to spread out his meals – feeding him a little bit five times a day – rather than the usual twice, like we did for our Briggs Bear.

Poquito always stayed close by in the kitchen, or by the table when we ate, just in case anyone dropped something … anything. It made sense to us, this obsession with food. After all, this little guy lived on the streets – he had to fight for any food he got – or he had to work those puppy dog eyes! Either way, it was work and it was up to him. And it was all-consuming. He lived with a daily fear that there would not be enough.

It took time and patience on our part before he was able to let up in his pursuit and find some rest, before he was able to let his guard down and trust that the food would come, even if he wasn’t begging for it. And once we recognized where this obsessive behaviour was coming from, we were less annoyed (because it was annoying sometimes!) and more compassionate. It wasn’t intentional on his part to make our lives difficult. In fact, he had little to no control over his impulses. He was driven from within.

How different things are now! Where once he would stay neurotically by his bowl waiting for his food, and gobble it all up, now he’ll stroll over and even leave some in the bowl for later, if he’s too full now. Where once he would stay by your feet in the kitchen waiting for ANYTHING to drop, now he lies in his bed and only gets up if it’s cheese you have dropped. Cheese is his favourite and somehow he knows the difference between a piece of cheese dropping and say, a blueberry – which he isn’t particularly interested in.

And I let out a sigh of relief, knowing that he is finally at rest, and finally trusting that the provision will always be greater than the pursuit.

And don’t we all need to know this? Dog, child, adult alike – that there is more than enough food to go around. More than enough love – that we don’t have to work for it, and that we can take it for granted, without worrying that it will be taken away.

I can’t help but think of those children in our foster care system – children who have had to take matters into their own hands to keep themselves safe and fed. When you cannot count on those around you to be there, when you may be up and moved yet again, how do you rest in that place?? No wonder some obsess about their belongings, or hoard food, or keep themselves at a distance from anyone who has love to give. For in their experience, these things can’t be taken for granted; they could be taken away.

In fact any child who has been faced with a separation too much to bear, who has taken matters into their own hands, who is in relentless pursuit and high alarm, may have a hard time being convinced that there will be enough – that there will be more than enough. That you care and will continue to care – no matter what. When we have a child in this place, it can be challenging to bring them to rest. We have to work harder – so that they don’t have to work. We need to get there first, providing what the child needs – contact, closeness, a sign that they are special, that they matter – before they ask for it. Or at least providing MORE than what they ask for.

And in time, the hunger that seems insatiable will become easier to satiate. For just as Poquito let down his guard, so the child will start to trust that there is indeed enough, and there will still be more tomorrow!